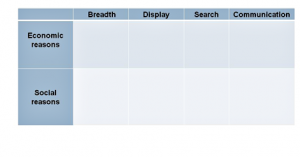 This papers offers some recommendations to our students on open book exams (in German):

More and more often algorithms determine our world. Google search is obviously based on an algorithm, movie proposals in Netflix are derived from an algorithm, the products Amazon is recommending to us are calculated by an algorithm, and our newsfeed on Facebook is determined by the Edgerank, an algorithm. And there are a lot more examples.

While algorithms are convenient (and cheap) – no human effort is needed during execution –, the question remains whether they are also effective and wise. Can you really “calculate” (and that simply is what algorithms do) human behavior? And even if one could, would we human beings want to be calculated? Or wouldn’t we just for the sake of demonstrating that our actions cannot be calculated decide differently?

And how do these algorithms change our behavior and thinking? Have you realized that you already have altered some of your actions, so that the “machine” can “understand” you? And if these algorithms just recommend to you what you like (movies, music, news articles, books, products, locations, opinions etc.), how do you ever get your sight on new thoughts which usually are much more enriching for your life?

Whether it is personalization, predictive actions or matching, all require data. What is important is not so much the amount of data you collect from each single user, but the combination of the data of your (and maybe even partners’) users.

I am honored to be part of the Advisory Board of the Secretary of Commerce of the German state North Rhine-Westphalia  (http://www.digitalewirtschaft.nrw.de/beirat/). The objective is to advance digital business in the state.

I have been asked which competencies founders of digital ventures need. My response: Clearly, they need economic knowledge on digital businesses. As a founder I need to know:

With social media and other Internet communication tools we see an explosion of communication both in terms of volume and speed. The higher speed allows for a much faster processing of information in society. One effect is that topics can be discussed and handled in a shorter period of time. This leads to a shorter lifespan of a topic. The increased volume necessitates much more “marketing” for a topic to gain awareness in society.

Both factors combined lead to an increasing number of hypes and probably also the necessity to hype a topic in order to gain attention for it in society. In this respect we see a “hypization” of society. Will we continue to move in this direction? Where will this lead society to?

Media companies should be better prepared for digital business than many other companies. They are used to produce and sell information goods. And often they are experienced with two-sided markets. Both areas are important in digital business.

Customers can easily switch vendors in the transparent and often global digital marketplace. They are often hunting for the best deal and whichever vendor can offer this best deal will get the business (spot market).

The best deal is not necessarily the one with the best price, there are other values as well (e.g. convenience). And sometimes network effects are important and platforms are developing.

My thesis is that owning the customer is the central success factor in the digital economy. Whatever the specific situation looks like, vendors should not compromise on keeping their customer relationships. Otherwise they may end up as interchangeable subcontractors to dominating platforms.

This is just a first exploration into a plethora of topics. More elaborate thoughts will follow.

The new Master program Digital Business Management which I will be heading at my university has finally been approved. It will clearly focus on digital businesses and their management. See RFH website for further details.